…or: The Great Server Shootout

ArangoDB is a database server that talks HTTP with its clients: clients send HTTP requests to ArangoDB over TCP/IP, ArangoDB will process them and send back the results to the client, packaged as HTTP over TCP/IP.

ArangoDB’s communication layer is thus the foundation for almost all database operations, and it needs to be fast to not become a bottleneck, blocking further database operations.
To assess the actual performance of the communication layer, we did some benchmarks that compare ArangoDB’s network and HTTP processing capabilities with those of other popular servers.
ArangoDB is a database server and thus offers a lot more than just HTTP processing, but in this post we’ll be concentrating on just the networking/HTTP parts of the product. It is likely that we’ll publish results of further benchmarks that involve other parts of the system in the near future.

Though we’ll be trying to disclose the methodologies and results of this benchmark, the usual disclaimers apply here as well:

We were interested in how fast ArangoDB could handle HTTP requests. And what kind of tools could be better at handling HTTP requests than…, well, web servers?

So for this benchmark, we have conducted load tests with the following products:

As you can see from the above list, we have chosen to compare ArangoDB with some popular web and application servers. Comparing a database server with web and application servers might first look like comparing apples and oranges. We think the comparison is still ok because ArangoDB is not only a database server, it is also an application server that is capable of executing dynamic scripting code (Javascript code using Google V8 and Ruby scripts using MRuby). Additionally, it can be used as a file server. This feature of ArangoDB is exactly what we’ll be measuring in this post.

We have picked well-established general-purpose web servers such as Apache httpd as well as their more stripped-down and more specific counterparts such as Nginx and Gatling. Apache httpd 2 has several different multi-processing modules (mpms). As we weren’t sure which one we should as a baseline, We have used the following Apache mpms in the comparison: event, worker, and prefork.

We only picked open-source tools for our tests so we could compile everything ourselves with the same settings. No pre-optimised binaries have been used. And as we were interested in measuring the HTTP layer, we only picked tools that speak HTTP out of the box.

For each product tested, the number of concurrent client connections was increased from 1 to 512 to also assess the servers’ scalability. For each concurrency level, 3 test runs were conducted and the average results of the 3 runs were used as the overall result for that concurrency level.

The communication between client and server was HTTP over TCP/IP in all cases. HTTPS/SSL has not been tested. HTTP Keep-Alive has been used for all client requests.

In the “local” scenario the client and the server parts were running on the same physical host so they might have competed for the same resources. This should not be a problem because this will not change the relative results, only the absolutes (that we’re not too much interested in).

As all products were installed on the same physical host, the server configuration was identical for all products:

As we were not interested in disk performance, all logging facilities offered by the server products (e.g. access logs, error logs) were turned off. All products were run with the same normal-privileged user account so the operating system imposed the same limits on them.

CPU stepping was turned off during the tests so all server CPUs ran at their maximum frequency. Recurring jobs (cron etc.) were disabled on the server for the duration of the tests.

The test client used in all cases was ApacheBench 2.3. It is known that ApacheBench is single-threaded and can itself become a bottleneck for high-throughput tests. Furthermore, the aggregation of test results within ApacheBench at the end of each run might also skew the results slightly. However, we found these two issues not to be a problem in our case because with the very small HTTP GET requests sent, ApacheBench produced sufficient load and did not become a major bottleneck. Slightly skewing the results in the aggregation phase was also unproblematic because we knew it would be the same in all test runs and would not affect the relative results at all. So we decided to use ApacheBench because of its ease of use and wide-spread availability (so others can reproduce the tests if they want to).

The command used for the tests was:

The results consist of the following data series:

The actions performed for each series were identical and comparable: the same static file was requested by the client, read by the server and its contents returned to client.

Please note that this benchmark’s goal was not set any world records, so the absolute result values aren’t very interesting. They will likely vary with the hardware used anyway, and using better test servers will likely result in getting better results.

Full results can be found in the document accompanying this post: Performance test results

Results of the “local” scenario 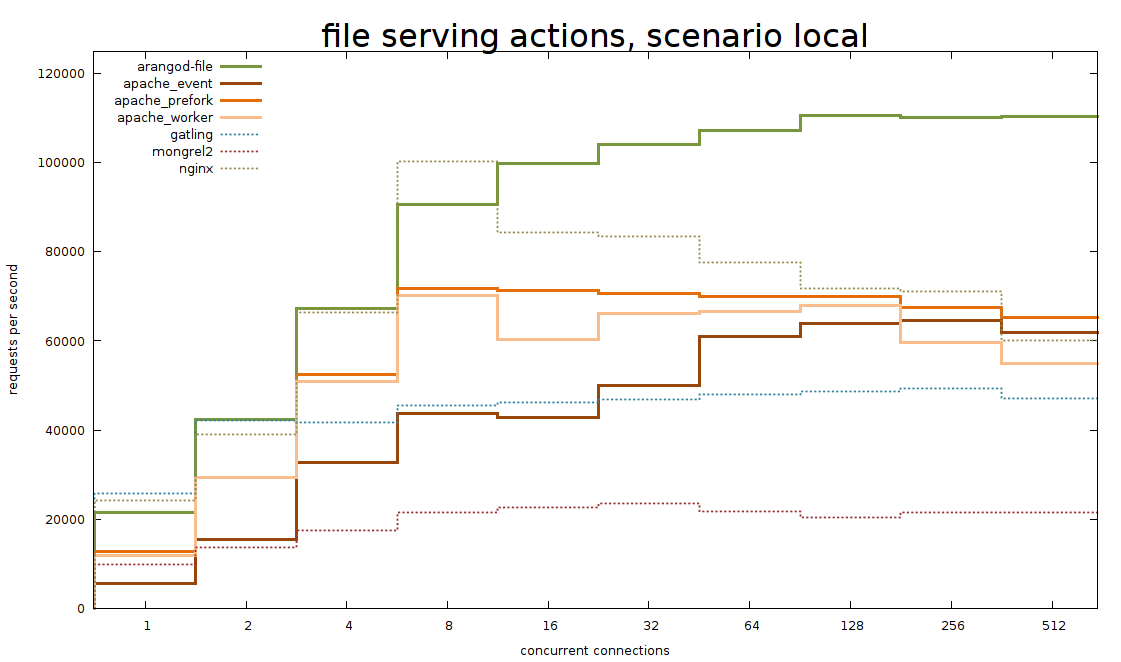 Results of the “network” scenario 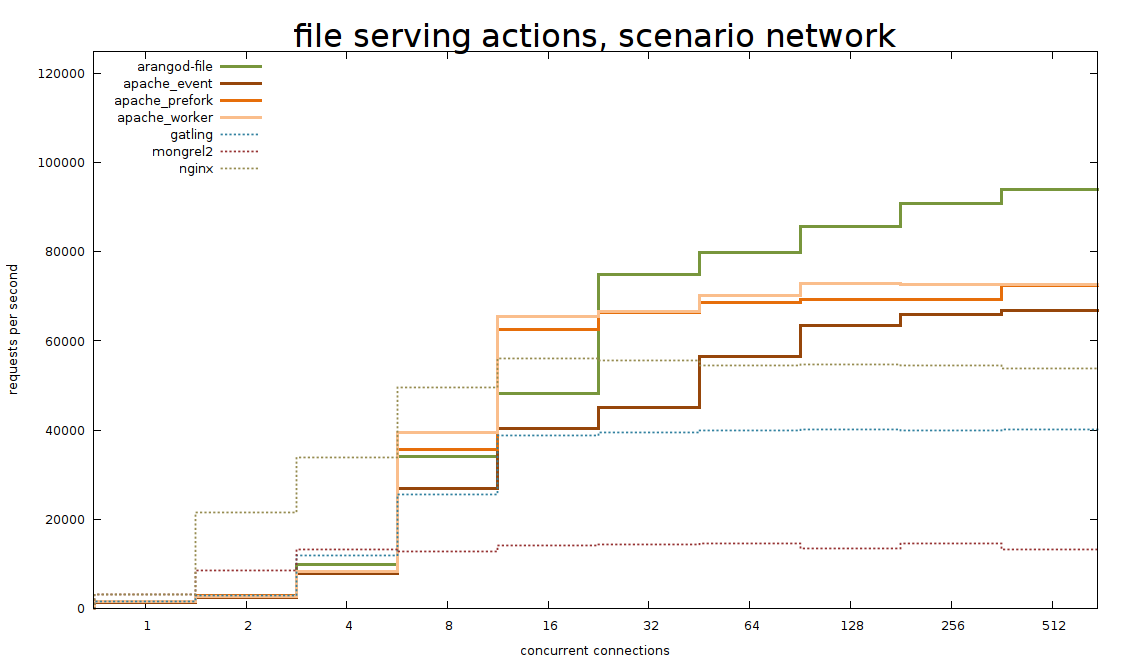 Overall, it seems that ArangoDB’s network and HTTP layer can generally keep up with those of other HTTP-based products in terms of throughput. For low concurrency situations, some highly optimised products such as Nginx performed better.

Overall it seems that the networking and HTTP stack in ArangoDB is not likely to be a major bottleneck for regular operations. However, as some of the other products showed better throughput at low concurrency, it seems that there is still room for optimisation in ArangoDB’s request handling. Especially, it would be interesting to know what Nginx does to achieve that superior performance in low concurrency situations. If anyone knows, please leave a comment.

As mentioned before, we haven’t looked at memory consumption in these tests. Neither did we check CPU utilisation and other factors. These would be other interesting things to look at when performing additional tests.