More than two years ago, we compared the bulk insert performance of ArangoDB, CouchDB and MongoDB in a blog post.

The original blog post dates back to the times of ArangoDB 1.1-alpha. We have been asked several times to re-run the tests with the current versions of the databases. So here we go.

The test machine specifications are:

The total “net insert time” is reported for several datasets in the following charts. This is the time spent in the benchmark tool for sending to request to the database and waiting for the database response, i.e. excluding the time needed to create the chunks that are sent to the database.

The database versions used in the tests were the current stable versions:

Different artificial and real-words datasets with different sizes were imported. The datasets are all included in the benchmark tool’s repository.

Here’s an overview of the results containing most datasets in a single chart: 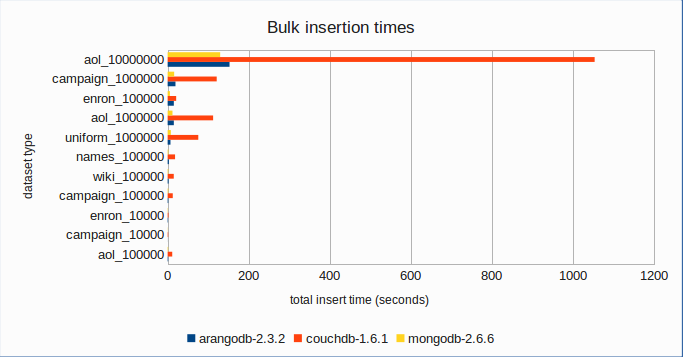 Here’s a closer look, with the x-axis scale limited to 0 – 200 to eliminate the CouchDB outlier: 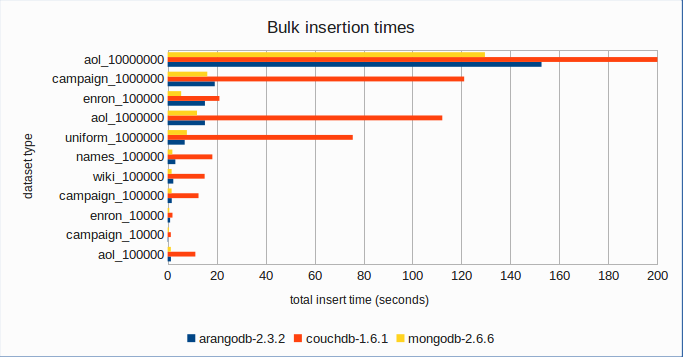 The following charts each contain a few datasets only, providing a better detail view: 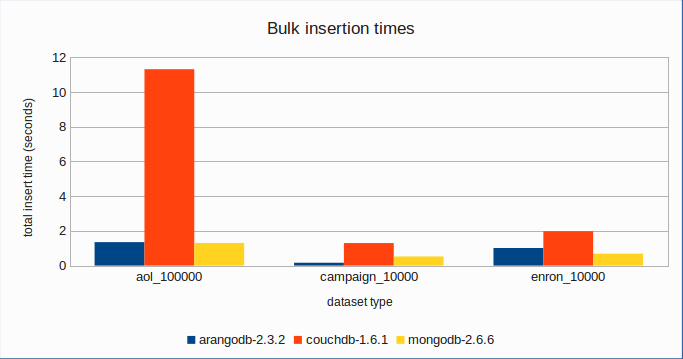 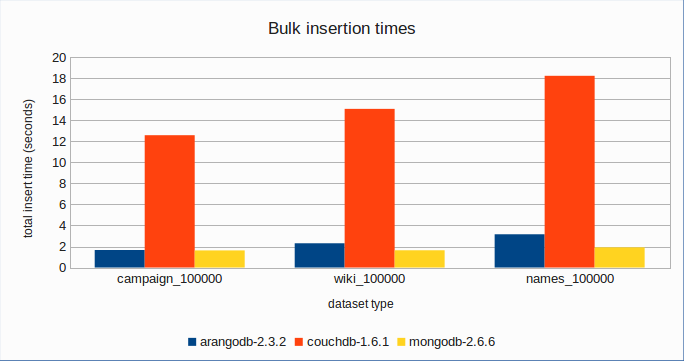 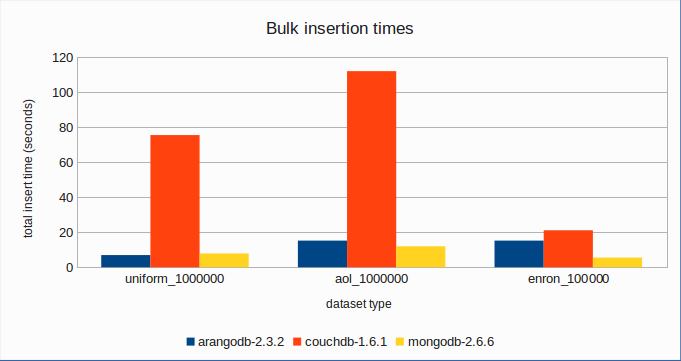 As can be seen from the results, the insertion times for ArangoDB and MongoDB are still in the same ballpark. The changes are minimal compared to the results of the 2012 edition of this test. ArangoDB is still a bit slower than MongoDB for most of the tests, but the difference is still not great. This is good to see. Several features have been added to ArangoDB since 2012 which could have had a potential negative impact on the performance (transactions, write-ahead log, replication, sharding – to name only the most important). It looks like adding these features hasn’t messed up the performance.

And CouchDB is still trailing. The insertion times for CouchDB are still significantly higher than the ones for ArangoDB and MongoDB.

These are benchmarks for specific datasets. The dataset volumes and types might or might not be realistic, depending on what you plan to do with a database. Results might look completely different for other datasets or for other test clients.

In addition, the benchmarks compare the HTTP API of CouchDB and ArangoDB against the binary protocol of MongoDB, which gives MongoDB a slight efficiency advantage. However, real-world applications will also use Mongo’s binary protocol so this is an advantage that MongoDB does have in real life (though it comes with the disadvantage that the protocol is not human-readable). Furthermore, there are of course other aspects that would deserve observation, e.g. CPU and memory usage. These aspects haven’t been looked at in this post. So please be sure to run your own tests in your own environment before adopting the results.

We have even more performance tests between various databases.