Sometimes when you have a complex query it can become very unclear where time is spend during the execution. Depending on the actual number of documents that have to be processed, it might be worthwhile to spend some time optimizing certain parts of queries while others are unimportant.

For example the collection scan and filtering might take up most time and it would be worth it to add an index to your collection.

To give you more insight into your query ArangoDB now allows to execute your query with special instrumentation code enabled. This will then print a query plan with detailed execution statistics. To use this in an interactive fashion on the shell you can use the db._profileQuery(..) in the arangosh. Alternatively there is a new button Profile in Query tab of the WebUI.

Below the execution plan there are additional sections for the overall runtime statistics and the query profile.

An AQL query is essentially executed in a pipeline that chains togehter different functional execution nodes. Each block gets the input rows from it’s parent, does some processing and then outputs a certain number of output rows.

Without any detailed insight into the query execution it is impossible to tell how many results each stage had to work on and how long this took. By executing the query with the query profiler (db._profileQuery or via the Profile button in the WebUI) you can now tell exactly how much work each stage had to do: 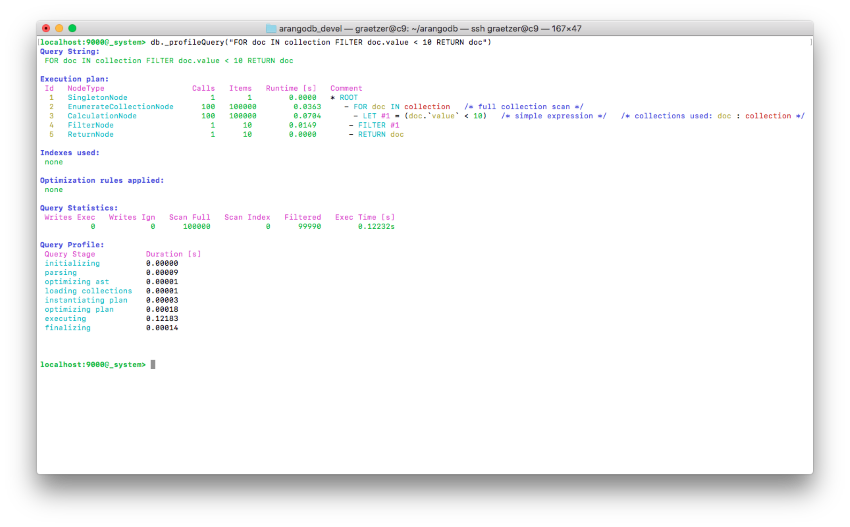 The EnumerateCollectionNode processed and returned all 100k rows (documents), as did the CalculationNode. Because the AQL execution engine also uses an internal batch size of 1000 these blocks were also called 100 times each. The FilterNode as well as the ReturnNode however only ever returned 10 rows and only had to be called once, because the result size fits within a single batch.

Now lets add a skiplist index on value to speedup the query. 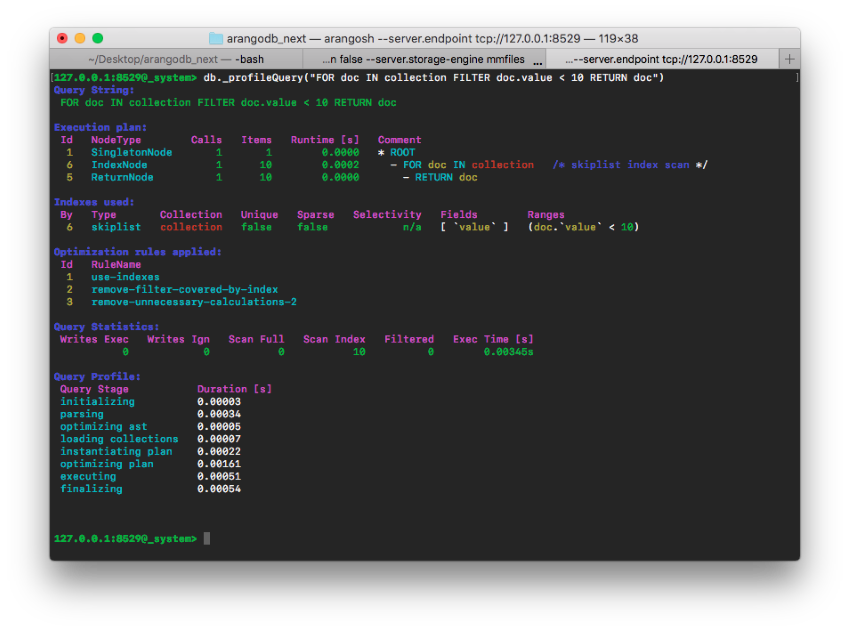 The results in replacing the collection scan and filter block with an IndexNode. The execution pipeleine of the AQL query has become much shorter. Also the number of rows processed by each pipeline block is only 10, because we no longer need to look at all documents.

Just for the sake of completeness, let’s also consider the following

The resulting query profile contains a SubqueryNode which has the runtime of all its children combined.

Actually, I cheated a little. The optimizer would have completely removed the subquery, if I had not deactivated it. The optimimized version would take longer in the “optimizing plan” stage, but should perform better with a lot of results.

Let’s try a more advanced example, using a COLLECT statement. Assuming we have a user collection with a city, username and an age value: 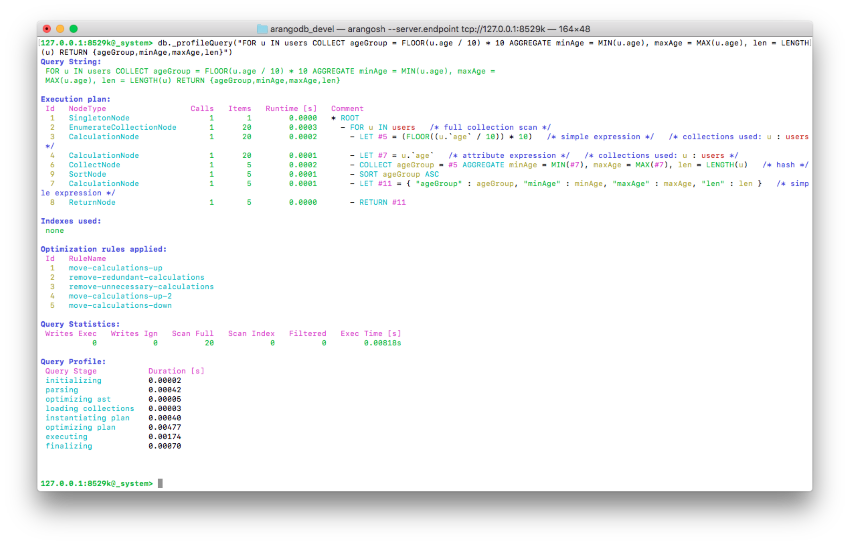 Like within the example above, you can see that after the CalculationNode stage, from the originally 20 rows only a handful remained.

With the new query profilier you should be able to spot typical performance mistakes that we see quite often:

Assuming you have two vertex collections users, products as well as an edge collection purchased. The graph model would look like this (users) <--[purchased]--> (products), i.e. every user is connected with an edge in purchased to zero or more products.

Assuming we want to know all users that have purchased the product playstation as well as products of type legwarmer we could use this query:

This query first finds all legwarmer products and then performs a traversal for each of them. But we could also inverse the traversal by starting of with the known playstation product. This way we only need a single traversal, to achieve the same result