In the previous post we published some performance results for ArangoDB’s HTTP and networking layer in comparison to that of some popular web servers. We did that benchmark to assess the general performance (and overhead) of the network and HTTP layer in ArangoDB.

Using ArangoDB as an application server

While HTTP is a good and (relatively) portable mechanism of shipping data between clients and servers, it is only a transport protocol. People will likely be using ArangoDB not only because it supports HTTP, but primarily because it is a database and an application server.

In this post, we’ll be checking what’s happening when ArangoDB is used as an application server. Using ArangoDB as such requires it to run user-defined actions. Currently, ArangoDB allows scripting in

It should be noted that MRuby is still early in its development and not officially marked as “stable”. It already works well for many cases, but will not be covered in this post.

We were interested in finding out how much throughput (i.e. requests per second) we would get when executing dynamic scripts in ArangoDB. As mentioned before, we measured the Javascript variant that uses Google V8.

To measure the throughput, we set up simple benchmarks that called the same Javascript actions in ArangoDB repeatedly. The actions were triggered via HTTP calls.

We also tested executing the same actions in node.js (again triggered via HTTP calls) to get some reference figures. node.js is quite an interesting reference because it also uses Google’s V8 engine for script execution as ArangoDB does. The versions used were:

node.js was used in standard mode (i.e. single-thread) and using the cluster module, with 8 children spawned.

We tested two scripts in both ArangoDB and node.js:

In all cases tested, the servers would accept the HTTP request, pass the request data to the Javascript handler, execute the script, and return the response to the client.

The tests were run with the number of concurrent client connections being increased from 1 to 512. For each concurrency level, 3 test runs were conducted and the average results of the 3 runs were used as the overall result for that concurrency level.

In the “local” scenario the client and the server parts were running on the same physical host. The communication between client and server was HTTP over TCP/IP in all cases. HTTPS/SSL has not been tested. The HTTP request was sent with “Connection: Keep-Alive” header in all cases.

The test client used for all tests was ApacheBench 2.3. The command used for the tests was:

ArangoDB and node.js were installed on the same physical server. To get comparable results, everything was compiled from source on the server. Compilation was done with gcc/g++ 4.5.1 and -O2 optimisation level consistently.

The server had the following hardware and configuration:

All logging facilities have been turned off. ArangoDB and node.js were run with the same normal-privileged user account so the operating system imposed the same limits on them. CPU stepping and recurring jobs (e.g. cron) were turned off during the tests.

By the way, we used the same test environment and scenarios as described in the previous post. Please have a look at that article for more details. Please be sure to also read the caveats of that article carefully.

All result details can be found in this file: Performance test results, dynamic code execution

We’ll first be looking at what’s happening when client and server were located on the same physical host.

When executing the “static” variant script, ArangoDB and node.js in single-threaded mode were on par (i.e. about the same throughput) when the requests came in sequentially (that is, concurrency level 1). When parallelism was increased, the throughput in ArangoDB increased up to including 32 concurrent connections and then stagnated. Maximum throughput was about fivefold the initial value. 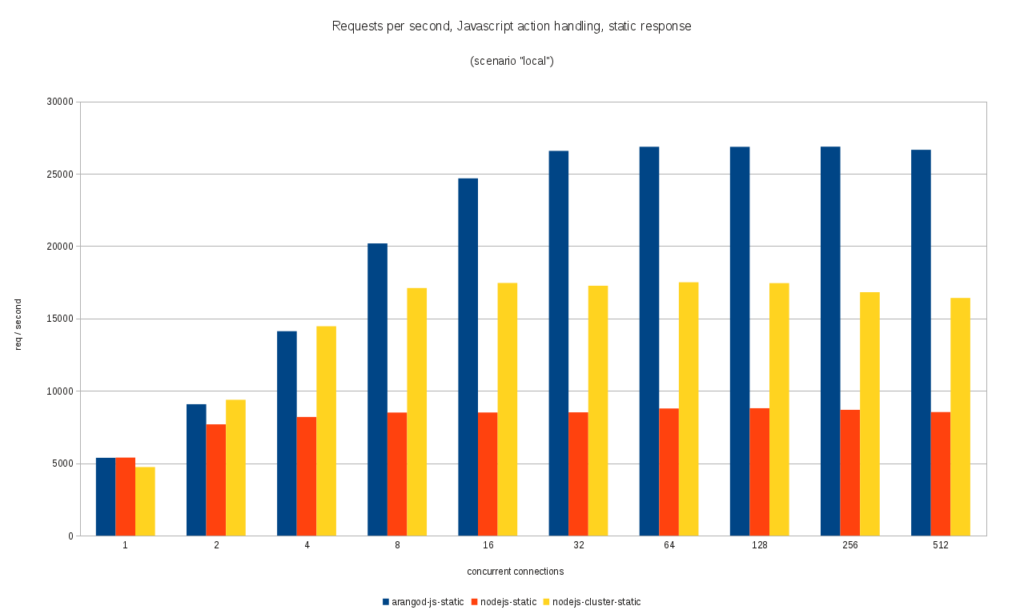 The results of the “factorial” variant had about the same relative distributions as the “static” variant, just the absolute values were lower because the servers needed to work harder: 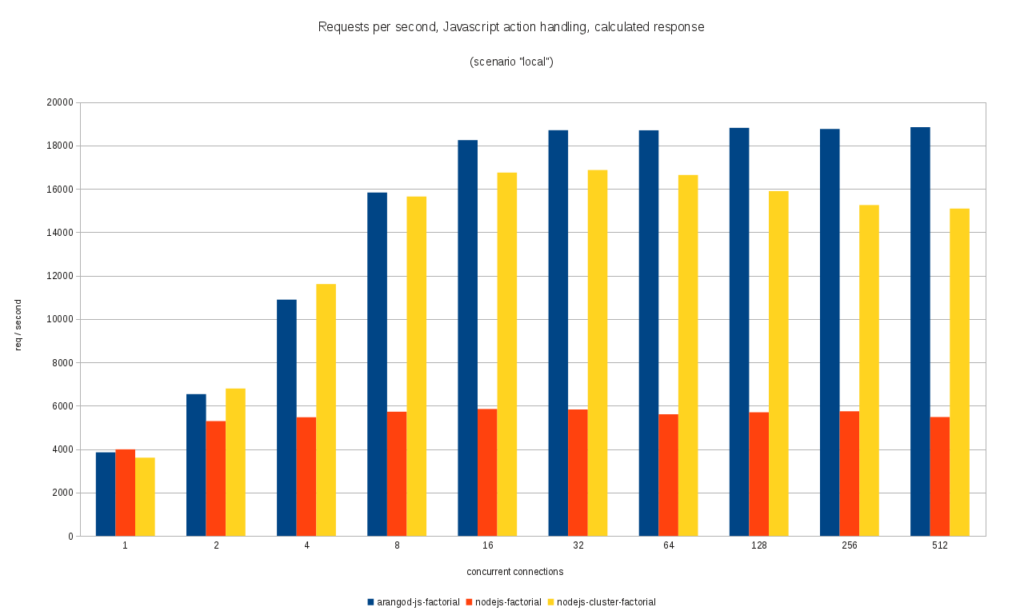 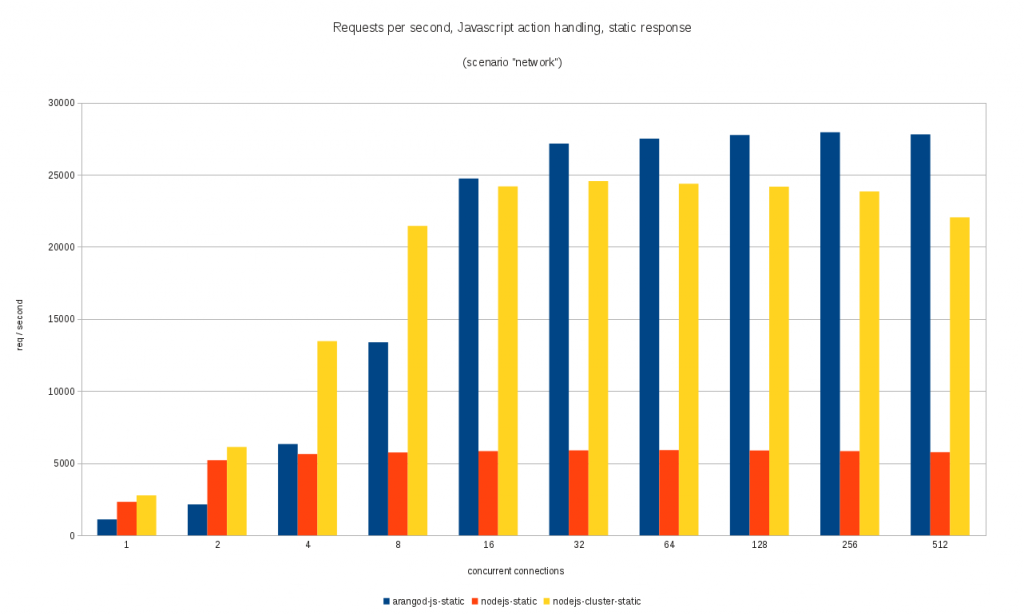 For the “factorial” variant, the relative results were about the same as for the “static” variant for up to including 8 concurrent connections, just with the absolute values reduced. After that, ArangoDB reached its throughput plateau and the node.js cluster outperformed it slightly. node.js cluster reached the throughput plateau at 32 concurrent connections. 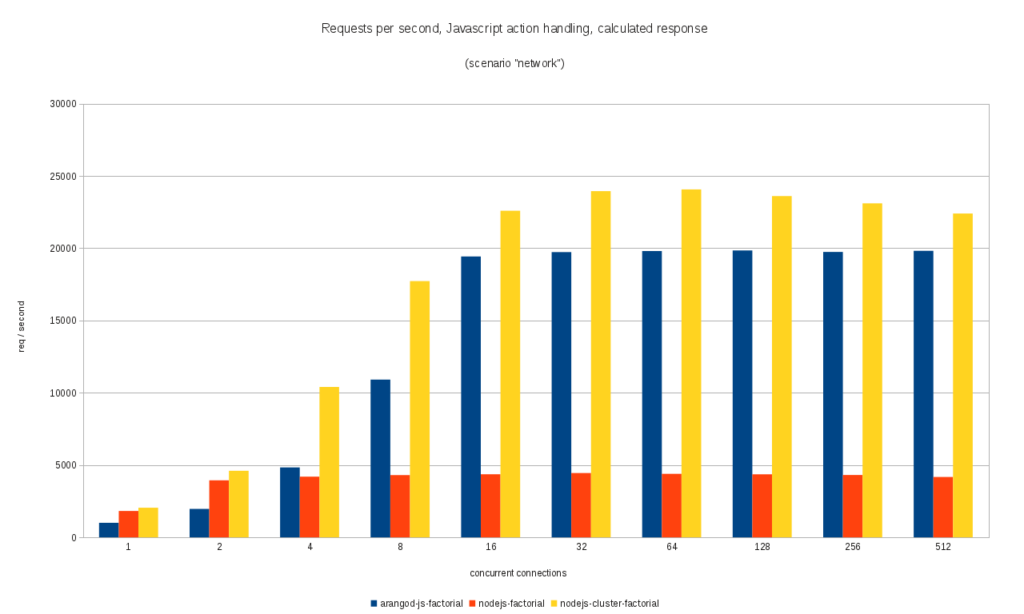 We observed in this benchmark that when client and server are on the same physical host, you can get about the same throughput rates for sequential execution of dynamic scripts in ArangoDB and node.js.

When requests come in in parallel, ArangoDB will also start executing scripts in parallel. This is because ArangoDB has a multi-threaded architecture that will dispatch script execution to worker threads. Throughput can be increased up to some concurrency level and then will eventually reach a plateau. Standard node.js will fall behind due to its single-threaded design. The situation changes when the node.js cluster is used. Using the cluster showed almost the same throughput as ArangoDB was able to achieve.

When client and server are located on different hosts, node.js in single-threaded and cluster mode showed better throughput than ArangoDB at no and low concurrency. We need to investigate why and see if we can get at this level as well. For the “static” scenario, ArangoDB throughput was slightly higher than the cluster’s at higher concurrency levels. In contrast, the throughput achieved with node.js cluster was higher than ArangoDB’s throughput even for higher concurrency in the “factorial” scenario. Again, we need to find out why there was a plateau at around 20K requests/second.

During this benchmark we observed a few things: