For the upcoming ArangoDB 3.4 release we’ve implemented a set of information retrieval features exposed via new database object View. The View object is meant to be treated as another data source accessible via AQL and the concept itself is pretty similar to a classical “materialized” view in SQL.

While we are still working on completing the feature, you can already try our retrieval engine in the Milestone of the upcoming ArangoDB 3.4 released today.
You can download and give it a spin here:

When dealing with unstructured or semi-structured data a user usually has only a vague assumption of what she is looking for. That means when executing a query she is not only interested in datasets that just satisfy search criteria but particularly the most relevant ones.

In order to achieve that we combined two information retrieval models: boolean and generalized ranking retrieval so that each document “approved” by boolean model gets its own rank from the ranking model. 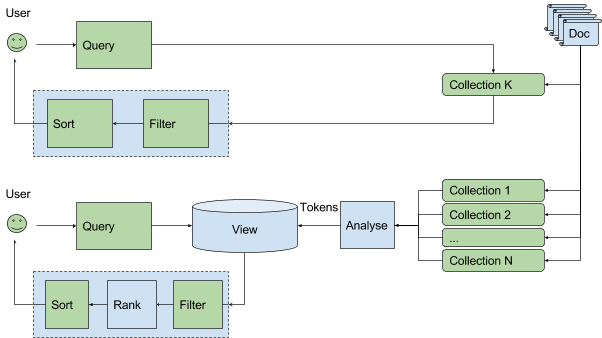 Since analysis and ranking phases are application dependent we will allow using your own plugins in future releases. As for this Milestone of the upcoming ArangoDB 3.4 release, we’ve implemented a set of analyzers and rankers that are mostly related to text processing.

For text retrieval, we use the Vector Space Model (VSM) as the ranking model. According to the model, documents and query are represented as vectors in a space formed by the “terms” of the query. The definition of “term” depends on the analysis phase of the application. Typically terms are single words, keywords or even phrases.

The document vectors that are closer to a query vector are more relevant. Practically the closeness is expressed as the cosine of the angle between two vectors, namely cosine similarity. 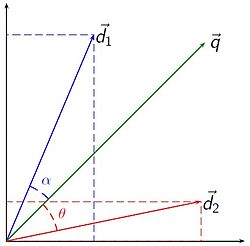 To evaluate relevance described above we have to compute vector components at first. Since we are in a space formed by the “terms” we use “term weights” as the coordinates. There are number of probability/statistical weighting models but for this Milestone release we’ve implemented two, probably the most famous schemes:

Under the hood both models rely on 2 main components:

The current full-text index in ArangoDB is rather limited in terms of functionality. With the upcoming ArangoDB 3.4 release, we will overcome these limitations and provide a complete text searching, matching and ranking suite. The following table contains view/index feature comparison:

Milestone version comes with a set of built-in text analyzers which support configurable stemming, stopwords and multilingual support (including Chinese, Russian and other languages).

If you’re interested in usage examples go through this extensive ArangoSearch tutorial or visit our documentation.

Data structures like “B-tree” or “skip-list” derived from the relational world allow to seriously speedup data access by the specified attribute(s) but they have serious drawback: DBA has to predict what the user wants to find, in order to create and maintain proper indexes on collections which is not always trivial especially in schema-less world.

We utilize the simplicity of JSON and its schema manipulation in order to eliminate data delivery mismatch between the database and the user’s expectation from schema-less database.
Schema agnostic indexing is meant to be treated as the ability to index any JSON attribute at any depth or the given set of paths, allowing fast access to documents via any combination of conditions over the indexed attributes. Unlike the collections with user-defined indexes, view guarantees the best execution plan (merge join) when querying multiple attributes.

Once view has been created one may establish an arbitrary number of links between collections (of any type) and a view. That especially useful when one needs to retrieve and analyze data from multiple collections based on some conditions, e.g. find the most relevant goods or books according to a given description.
Each link is meant to be treated as the data flow from a collection to a view so that data from a collection will be accessible via the view object. ArangoSearch view gives you full control over the data coming from a particular collection allowing to specify what and how should be indexed.

Since essentially graph is a combination of document and edge collections, it might be indexed by a view as well. With such approach, graph can be treated as flat and interconnected data structure simultaneously.
Dual approach allows combining information retrieval techniques with sophisticated graph traversals in order to speed up data access by a factor of magnitude, e.g. one can find the most relevant vertices according to a provided description and then do a regular traversal within a specified depth.

You can find more information regarding setting up indexing properties for view here: Extensive ArangoSearch Tutorial or documentation.

For upcoming releases we plan to implement more exciting features:

If you are already working on a project in which other analyzers, rankers or queries are badly needed, please let us know via hackers@arangodb.com or join #arangosearch Community Slack channel. We are looking forward to your feedback!

Andrey is an expert in information retrieval and recommendation systems. He is passionate about state-of-art search techniques and data similarity measures. As the member of ArangoDB core team, he is responsible for developing the ArangoSearch engine and further integration into the ArangoDB core.